START FOR FREE
Back to Home
BBuilder Spotlight

Located in New London, Connecticut, Blue Mill Construction is a third-generation carpentry and drywall construction firm founded in 2009 by Garry C. Miller Jr. By leveraging 1build, Garry reduced the cycle time it took to complete an estimate from more than three weeks down to just four days.
0
Shares
0
0
0
0
0

Garry is passionate about partnering with new homeowners going through their first renovation. He helps them navigate through the difficult tasks of home renovation, including managing their budget, financing their project goal, and ultimately committing to something that is “emotionally important to them.”

Garry started Blue Mill Construction when the roof of his local church caved in during service, under a heavy winter snow, over 10 years ago. He immediately pitched in to help the church rebuild and in the process ended up landing his first job. However, it’s that first church rebuild and renovation that still inspires everything Garry does today. By renovating old buildings, Garry hopes to both physically and spiritually rebuild communities.

Although Garry’s business grew steadily over the years, he worried that two problems were preventing Blue Mill from expanding further: (1) getting a handle on a myriad of variable costs, such as materials and labor, and (2) developing a winning bid-hit ratio.

According to Garry, he knew something drastic had to change when he realized it was taking almost a month to submit a bid. Because Blue Mill didn’t have an in-house estimator, Garry had to do all the research foreach bid, even for complex parts of jobs he didn’t have a lot of experience with. He initially tried to solve the problem by outsourcing cost estimation to another vendor, but then realized that although he was saving time, he gained two new problems: low-quality estimates and additional costs.

In other words, like so many other professional construction firms, Blue Mill was having a hard time getting quality bids submitted quickly and wasn’t winning as many bids as it should—resulting in sluggish growth and reduced profit margins.

Garry discovered 1build accidentally while browsing social media, but from the moment he spoke with a 1build estimator, he developed an instant rapport and forged a strong relationship. In fact, 1build not only assigned a dedicated project manager to Blue Mill, but also a cost estimator who Garry knew by name and engaged with regularly: “1build has really great client engagement.” According to Garry, the 1build team was able to effortlessly explain the process and cost and then reviewed the value of the final agreement with Blue Mill so it was “truly equitable for both parties.”

Beyond the strong partnership Garry formed with 1build, he was also really impressed by 1build’s upfront cost transparency and built-in estimate quality. For example, Garry knew exactly how much the estimating service was going to cost and that the final estimate 1build produced would be high quality—ultimately helping Garry to increase his bid volume and bid-hit ratio while saving him time. 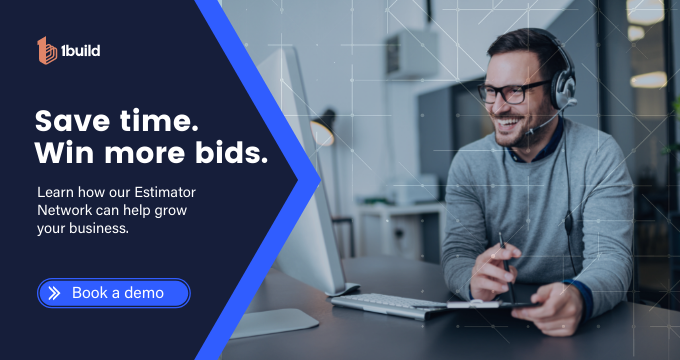 Indeed, according to Garry, 1build was so committed to quality that they “insisted on a QA review with me before they submitted the final estimate, which included a live review of the numbers to ensure I was very comfortable with the final bid.”

An added bonus for Garry was gaining access to 1build’s industry-accurate production and materials data, ensuring Blue Mill’s estimates would be extremely competitive in the market.

By leveraging 1build, Garry reduced the cycle time it took to complete an estimate from more than three weeks down to just four days.

1build also delivered on their promise by making Blue Mill more competitive in the market. Before 1build, Blue Mill’s bids were regularly only getting into the top 10 in responses. After investing in the construction estimating solution, Garry’s firm now regularly gets into the top 3-5 in project submissions. This has resulted in an overall increase in confidence in general contractors selecting Blue Mill as a qualified sub to work with on key projects.

In fact, Blue Mill is now a finalist on several projects and looking to sign its first contracts with new GCs attracted to Blue Mill’s new high-quality bid submissions.

With all the free time Garry now has thanks to 1build, Blue Mill can now compete for larger commercial contracts with state funding:

“1build is unmatched in terms of the value it provides construction firms like BlueMill. It’s a check for price, culture, and quality. 1build provided competitive prices, amazing customer service, and the highest-quality estimates. With 1build, I can finally take my business to a whole new level.”

Indeed, 1build has allowed Garry to finally deliver on Blue Mill’s promise to its customers that every job will not only be on time, on budget, and on scope, but also on value.

1build is an easy-to-use construction cost estimating software that allows contractors to bid with confidence and real-time, local cost data. So you save time, win more bids, and grow your business.

We’ve raised our Series A! Read More
BBuilder Spotlight
Champion Real Estate Company is a family-owned developer and investor specializing in building and owning “dense housing.” When 1build delivered the final estimate for Champion’s multi-family project, they were amazed by how accurate it was.